“Eating is a necessity, enjoying it is an art” 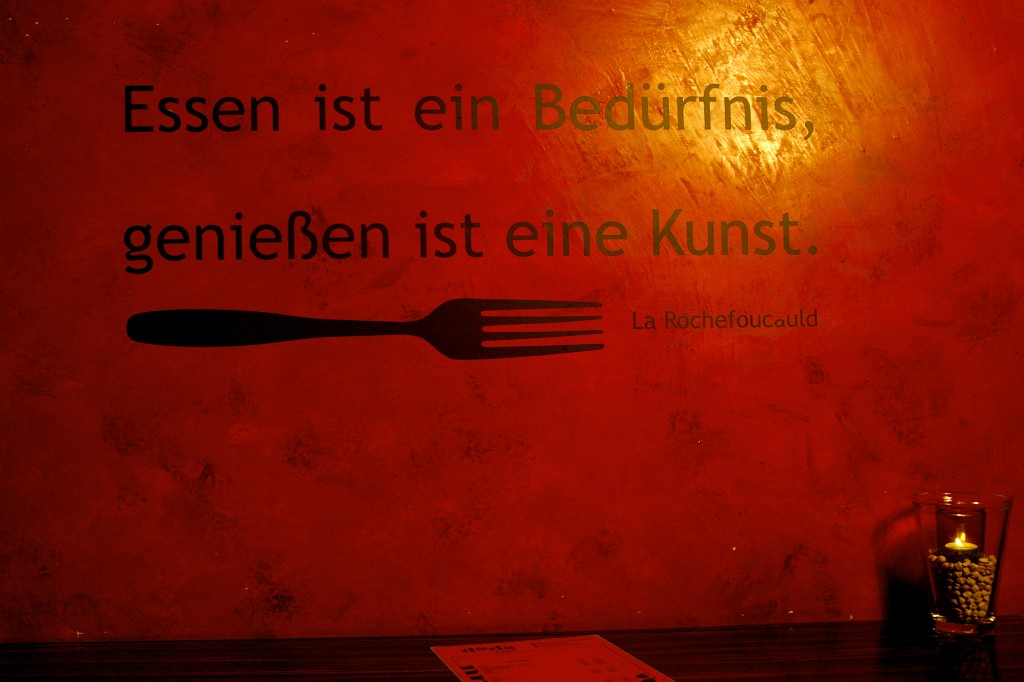 The La Rochefoucauld’s quote I pictured on this wall is the perfect one to start writing about my one week art and culinary adventure in Berlin and my blog in general. I was there to attend The Meal Cultures in Europe – Changes and Exchanges Grundtvig workshop and the red Dada falafel snack bar was one of the amazing places I run into.  Dada’s owner is an artist and the place is named of course after the cultural movement Dadaism. Weird as it sounds – is both a snack bar and a gallery! You can taste there in an artistic environment  fancy platters with crispy falafel balls, pita bread with hummus and a vegetable salad. Artful delicious! The current exhibiting artist was Barbara Duisberg. 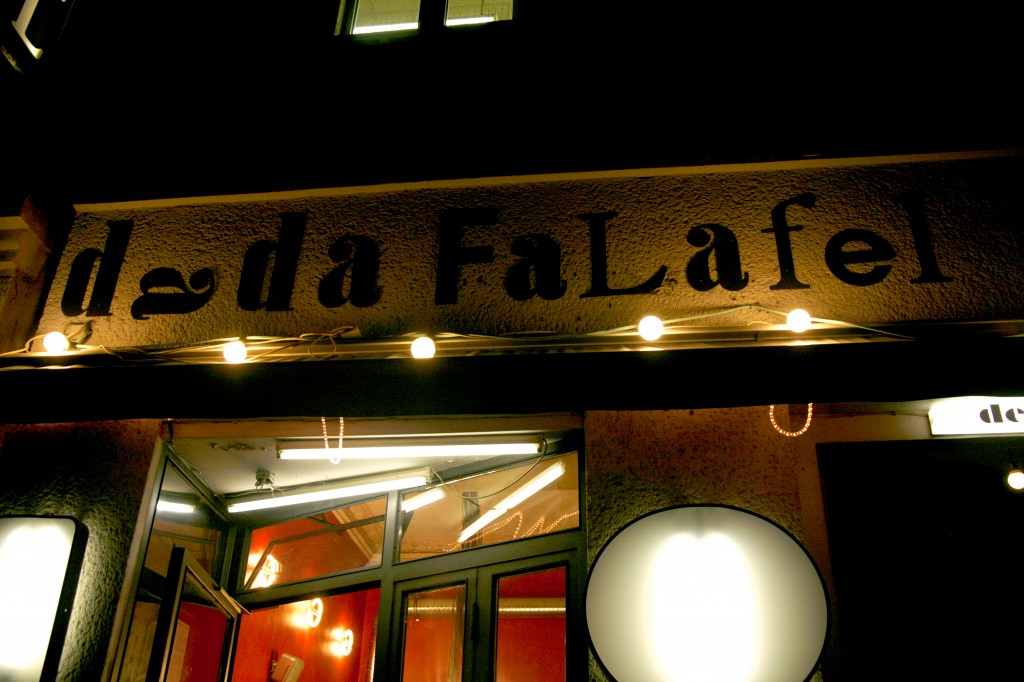 Our workshop took place in the building of Faculty of Agriculture at Humboldt University. The university was founded in Berlin in 1810 with the idea to provide students with an all-round humanist education. This concept spread throughout the world and become “mother of all modern universities”. 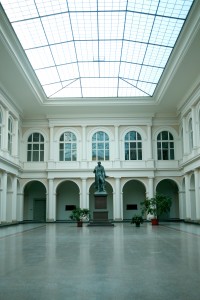 Very popular in Berlin are the Kochstudios (cooking studios). We were about 20 participants coming from various European countries and went to one to prepare and taste different nationality dishes. We also visited the oldest Asian Kochstudio in Berlin to learn how to cook Thai food. Our group was preparing the spring rolls and the mango-pineapple panna cotta! During the workshop we also had the pleasure to taste authentic Iranian Food and to meet very interesting people like the celebrity chef in Germany Sarah Wiener and Sabine Werth the founder of the Berliner Tafel (a non profit organization which collects donated food and distribute it to social and charitable organizations). Our program was very intensive and interesting thanks to our hosts dr. Parto Teherani-Kroenner, Brigitte Woertler and Sandra Stoll! 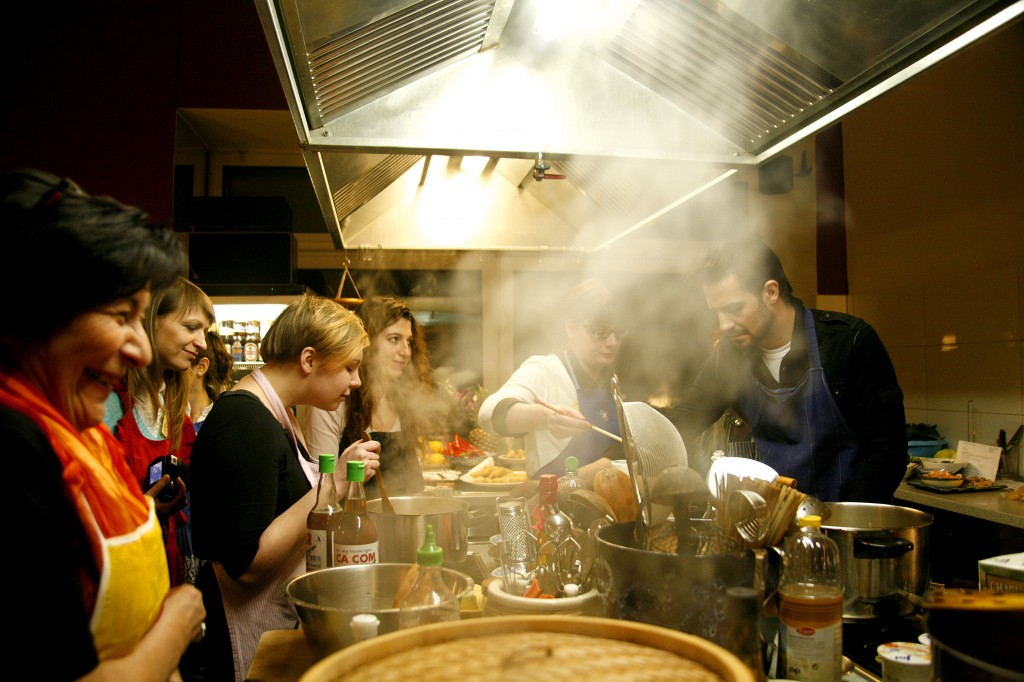 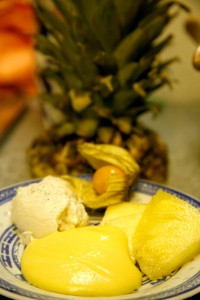 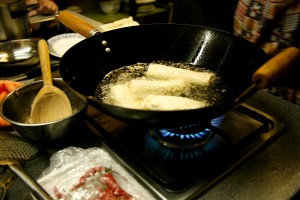 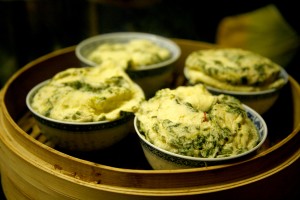 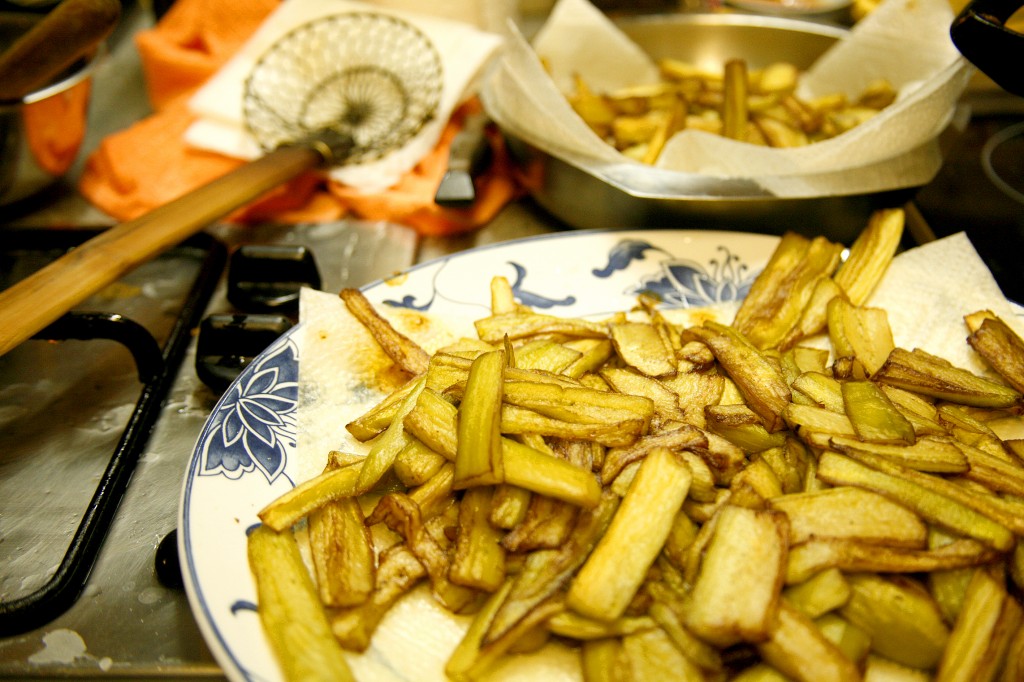 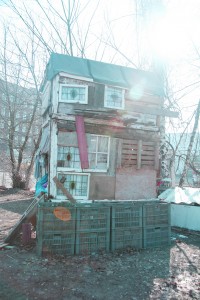 This eccentric fairytale hut belongs to an organization with such a fairytale name Prinzessinnengärten (Princess gardens). It’s built in a long forgotten motorway junction which Robert and his friends turned into miniature green utopia, an urban garden where during summer local residents produce fresh and healthy food. The space helps them adapt to climate change and learn about healthy eating, sustainable living and a future-oriented urban lifestyle. Sounds almost as a futuristic place from the science fiction novels of Margaret Atwood, but this garden’s a fact and luckily our planet is not devastated yet! It’s amazing that 200 people responded to the article posted in the local newspaper to help cleaning the space from the rubbish. And it’s praiseworthiness that urban gardens keep popping up in the most unexpected places in our big cities and you can grow your own food whether you live on a rural farm or in a tiny Manhattan apartment!

Elisabeth Meyer–Renschhansen (guest lector during our workshop and also a founder of the workgroup “Farming in the city”) shared with us her very interesting research about Hestia (Roman Vesta) – the virgin goddess of the hearth and the home. Hestia is also presided over the cooking of bread and the preparation of the family meal. This is the reason why she is considered as a chef goddess as well. I really love the concept of the cook in ancient times who used to appear as being responsible for the relationship of men with heaven and earth and was aware of the art of cooking as heal and poison. So, for many years, the hearth was considered an integral part of a home, often its central or most important feature around which family members gathered. Elisabeth’s lecture was very exciting to me, because of my interest in Vesta for a while and my trip to her temple in Rome is already on the way! 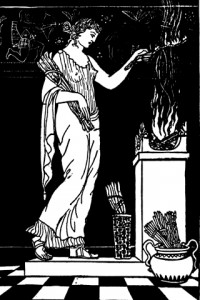 I arrived in Berlin on 20th of February, it was Sunday afternoon, but I went right away to C/O Berlin (luckily 5 minutes by walk from the place where we were staying – the Guesthouse of the university) to attend the exhibition opening of the Close up project. 18 young photographers were given the chance of presenting their personal vision of the 61st Berlin International Film Festival. On view was also the extraordinary retrospective exhibition of Robert Mapplethorpe – 187 photos from his career and the very interesting SHOOT! Existential Photography show – a collection of historical photographs based on the shooting gallery. This fairground attraction emerged in the years after World War I. The idea of having a selfportrait with a gun seduced many artists as Ria van Dijk. Once a year since 1936 she shoots herself. Her series documents almost every year of the woman’s life up until present times. There was a reconstruction of a real shooting gallery in the center of the exhibition too! 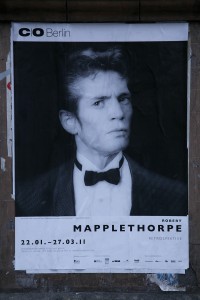 Hamburger Bahnhof is one of the most exquisite spaces for contemporary art! The building was erected in the mid-19th century as one of the first terminal stations of the rail system. Nowadays after reconstruction it’s reopened as the Museum for Contemporary Art. Dan Flavin’s last work on its impressive Neoclassical facade has come to be seen as the museum’s trademark. My personal favorites are the abstract drawings of Otto Zitko improvised across the walls, especially the blue ones! 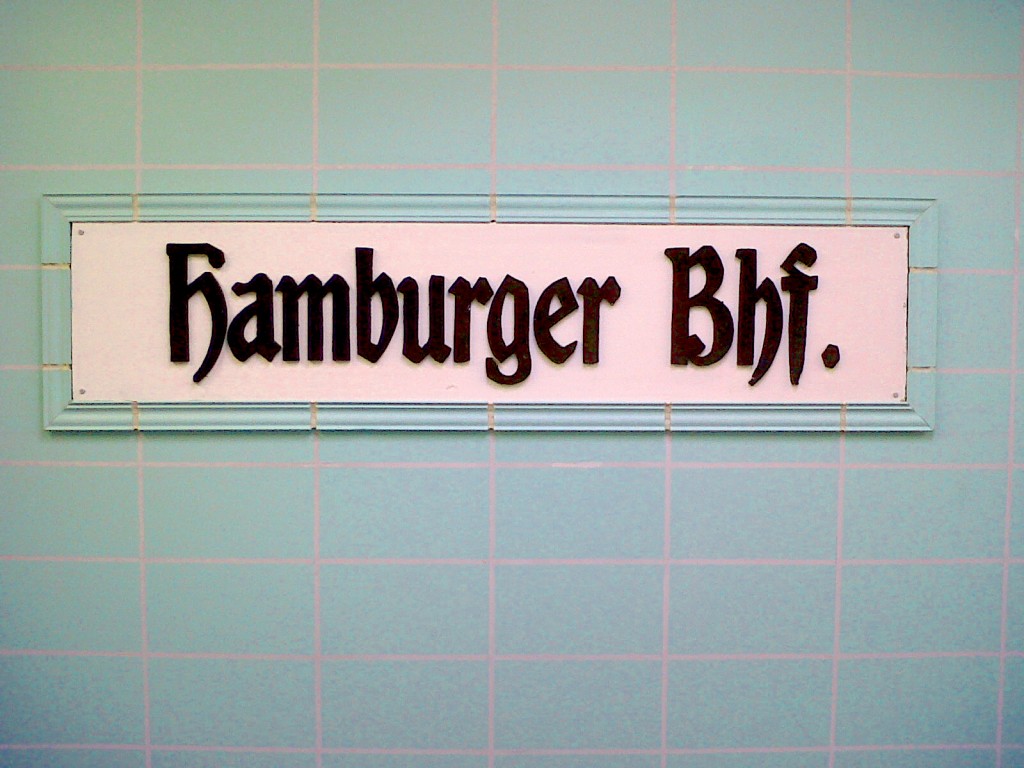 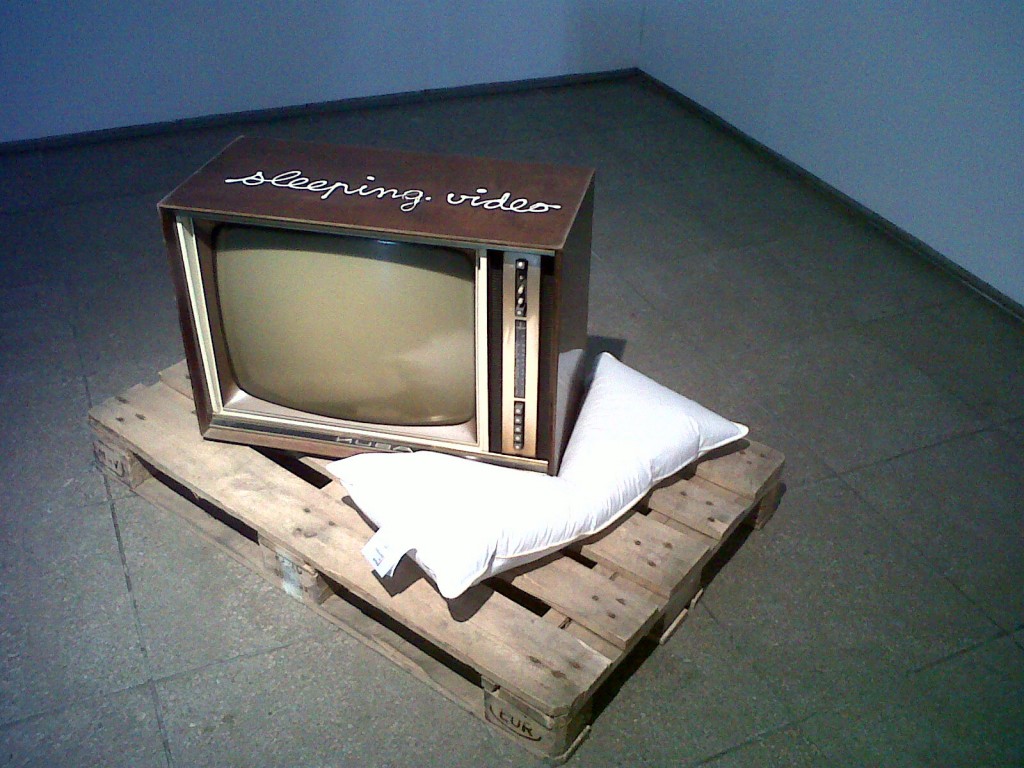 I was surprised to find out that the Guggenheim museum in Berlin is much much smaller than the one in New York, but the installation of Agathe Snow ALL ACCESS WORLD questioning the national identity was vividly impressive. 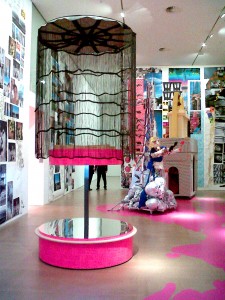 I also visited the GALERIE FUER MODERNE FOTOGRAFIE: on view was the show of the French photographer Paul Hance, which I liked very much, because his work just like mine deals with the human aura. His series of portraits “One Love” show a contemporary form of the traditional religious icon. Each of his work is unique silver gelatine print overlaid with gold leaf and silver. 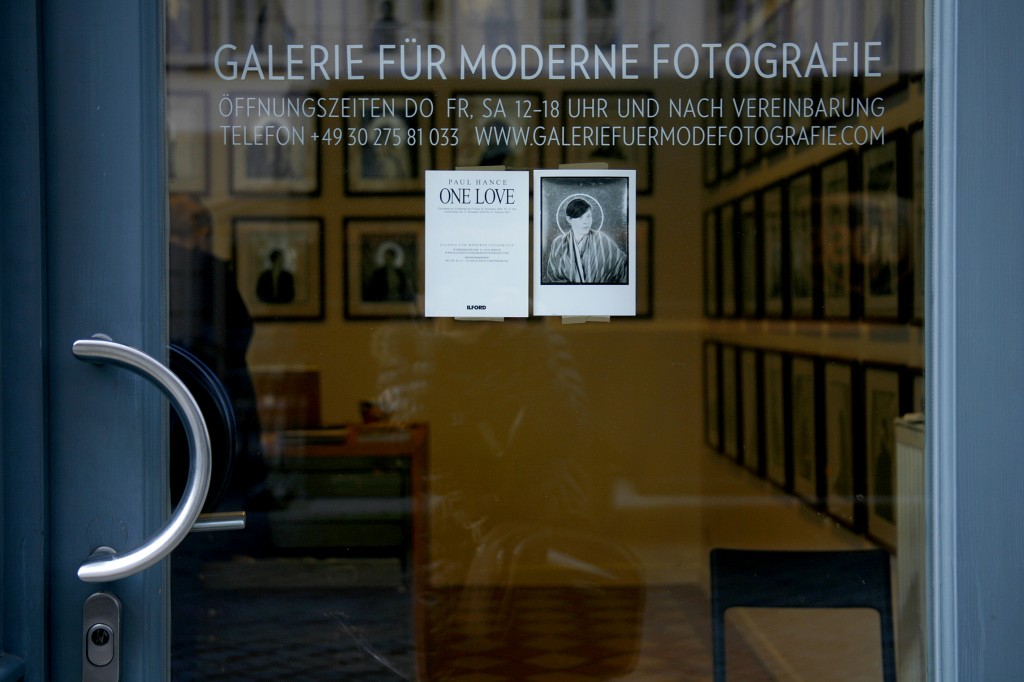 Well Berlin, I think I love you! 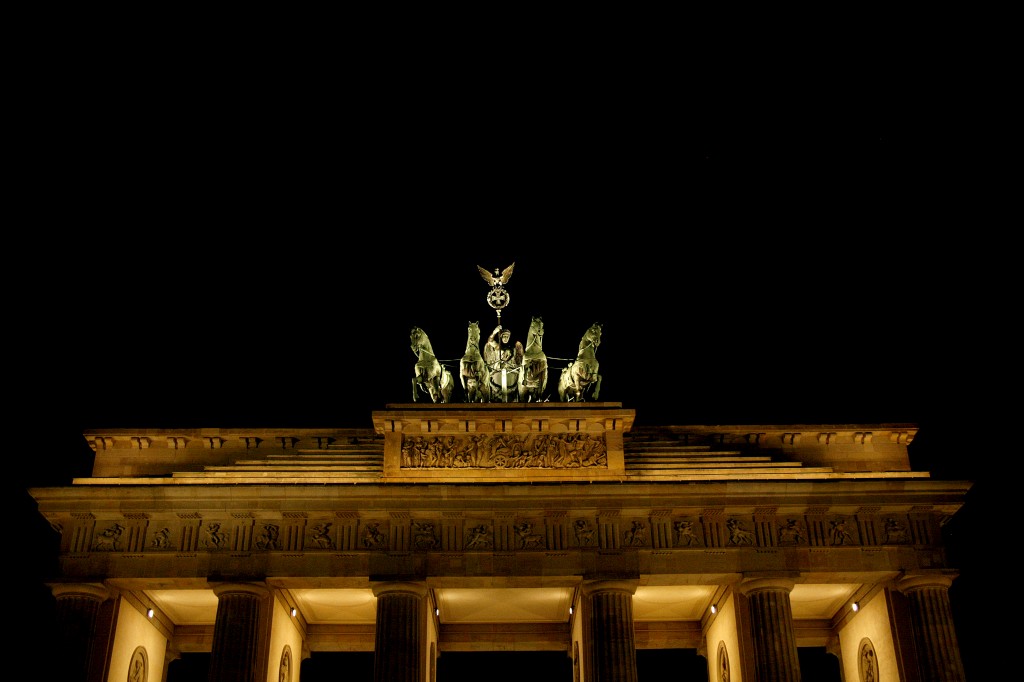 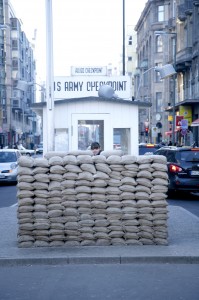